Our Virtual Assistant, Charlotte, lives in Phoenix. One of her first hiking adventures was Piestewa Peak, one of the many mountain parks that dot the Phoenix Metro area. 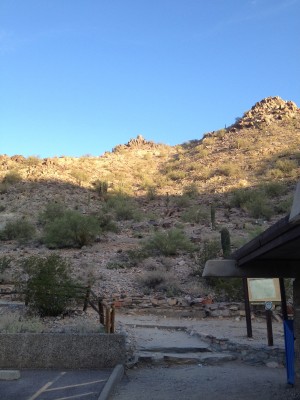 Despite having lived in Phoenix for over 40 years, I never hiked the famous Piestewa Peak. It is in the news seeminly all the time; rescue teams regularly are called to assist hikers who have fallen, or are overcome by the heat. The trail is considered one of the most challenging in the Metro area,with a 1190 foot elevation change over from the trail head to the top, 1.2 miles later. Having never hiked before, I had no idea exactly what an 1190 foot elevation gain over 1.2 miles meant. Lucky me.

The photo to the left shows the trail head; you can't see the peak from this angle. It looks like a pleasant Sunday stroll from here. 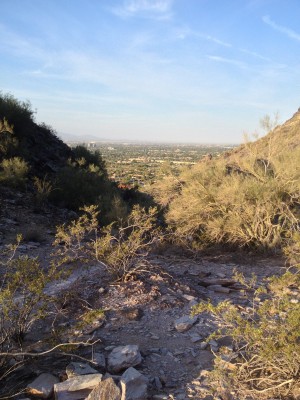 The photo to the right was taken quite a bit up the trail, when I started learning exactly what the elevation gain meant. It was a beautiful view though, just like pretty much everywhere along the trail. 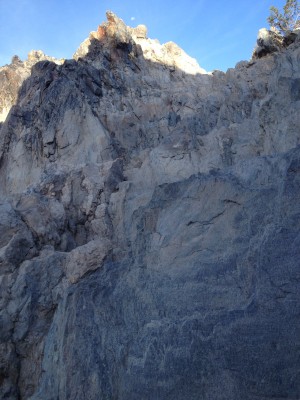 I'm a pretty avid walker, and 1.2 miles on flat terrain is nothing for me. But steep trails, I soon learned, are a totally different ballgame. There were several times I thought of turning back, but after resting a few minutes decided to go on... until reaching what seemed like a completely impenetrable rock face (left.) I was tired, and muscles I didn't even know I had were aching. Possessing a pretty healthy fear of heights, the idea of trying to scramble up the rock face was not something I had anticipated. Sitting on a nearby rock to catch my breath, I decided to head back down. Then a woman came up the trail. Without a moment's hesitation, she scrambled over the rock face using hand and toe holds I hadn't noticed before. She made it look so easy that I decided to give it a try. 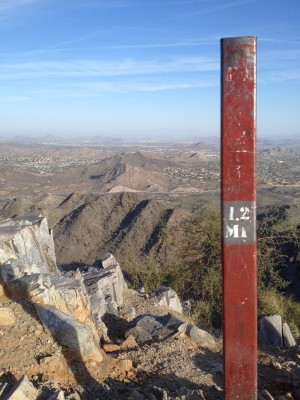 And, up on top of that rock scramble was the trail end marker. I had made it to the top! Surrounded by beautiful views of the Valley, I suddenly realized there was a lesson here. Had I turned around at that major obstacle, I might have been quite happy with how far I had come, and never would have known that just on the other side was the Big Reward. I sat on the summit for quite awhile, digesting the lesson the peak had taught me, and completely amazed at how what had started out as a little hike turned into a life-changing experience!